2018 SAW HIGHS and lows for many producers, from record high yields for some crops to difficult planting and growing conditions and widespread DON in others. Through it all, Agricorp’s goal has been to ensure our customers get the service and information they need when they need it. We’d like to thank Grain Farmers of Ontario for their collaboration and for supporting our efforts to keep customers informed.

To help you plan for the 2019 renewal season, we’re looking back at 2018 and the programs that helped farmers when they needed it.

Ontario corn producers and industry as a whole faced uncertainty as DON left questions about the marketability of the crop. The fact that each producer’s situation was different added to the complexity of the issue as a whole.

Corn also had exceptionally high yields in 2018. As of February 6, the average yield was 181 bushels per acre, an increase from last year’s Production Insurance 10-year average of 170 bushels per acre. Production Insurance is a yield-based program, and this year’s above average yields resulted in many of our insured farmers being well above their production guarantee. These yields offset production losses customers faced due to DON.

DON caused concern for not only farmers but also other key stakeholders, such as government and elevators. Agricorp and these stakeholders needed time to see how the DON markets settled, to understand the quantities of good corn and corn affected by DON, and understand the impacts to the value chain. Because of the market uncertainty and high yields, we felt it was important for insured producers to understand how their Production Insurance coverage worked and understand their individual claim positions before making the best decisions for their farms. Production Insurance is a yield-based program, which means high yielding fields can offset low yields and result in no payment.

With these challenges in mind, Agricorp responded by mobilizing resources to ensure customers got the service they needed. We also worked closely with stakeholders to address industry concerns, and we communicated regularly and broadly to keep farmers informed. We also enacted the salvage benefit.

The 2018 corn salvage benefit applied to corn with tests showing DON levels above 5 ppm. Eligible customers received $0.79 per bushel, up to their guaranteed level of production, to help with the extraordinary cost of harvesting, marketing, or feeding corn affected by DON.

NEXT STEPS FOR PRODUCERS AFFECTED BY DON

Not all yields have been finalized for Production Insurance, as some customers continue to assess the marketability of their 2018 corn. 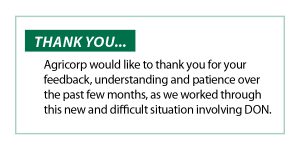 Customers do not need to sell their corn by a specific date. Adjusters are working with customers to identify their individual circumstances and, where possible, finalize a yield and any production or salvage claims.

Customers and industry groups provided feedback during this difficult situation. We will be working with industry groups and government to understand what is needed and to see if there are options to enhance the program in the future.

Producers file damage reports with Agricorp when they suspect damage, not necessarily when the damage can be quantified as a loss. While producers filed over 3,000 damage reports relating to DON, not every damage report resulted in a yield shortfall or was for DON levels above 5 ppm. Many producers who filed damage reports ended up with good corn above their Production Insurance yield guarantees.

The salvage benefit, in particular, helped customers with the costs to harvest, dry, or feed their DON-affected corn. Because the benefit also helped with the costs of storage, it gave customers the option to wait and find an alternate market, or market their crop at a later time, when it was more favourable.

As of February 6, 2019, Agricorp has paid $25.5 million in production and salvage claims for corn. Our goal is to pay claims as quickly as possible; however, there are a number of claims that will need more time to be finalized. Total claim information will be posted on agricorp.com when it becomes available. 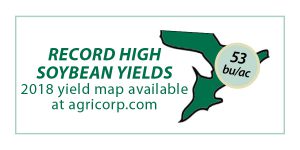 2018 A RECORD YEAR FOR SOYBEANS

A dry start followed by rain in August contributed to record high soybean yields across Ontario. High yields can lead to increased Production Insurance coverage in future years since a producer’s coverage is based on their individual yield history. An above-average yield raises a producer’s average farm yield (AFY), and the higher a producer’s AFY, the higher the level of production Agricorp guarantees.