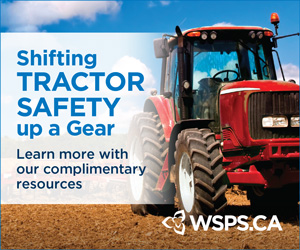 The facility is focused on, but not limited to, wheat breeding. Researchers are using state-of-the-art techniques, such as di-haploid production, to develop wheat varieties that are superior in yield and have a genetic tolerance to diseases (specifically Fusarium head blight).

The building itself has been designed to make use of the newest technology. A thermalization cabinet allows plants to be grown at 3°C to simulate winter. In another growing chamber, LEDs, which give off a red-blue light, are used to mimic sunlight and speed up plant growth. They provide a more uniform dispersal of light throughout the room than traditional fluorescent lights.

This is the only private research and breeding program in eastern Canada. This year they are field testing varieties that can be grown in all wheat breeding growing regions of North America. The majority of the finished wheat and other cereal varieties developed by the Nairn station are marketed by Hyland Seeds. •

2012 Seed of the Year finalists announced
Four seed varieties have been named finalists in the eighth annual Seed of the Year competition for eastern Canada, sponsored by the University of Guelph and SeCan.
Divident VL Orchard Grass, ExRico Beans, OAC Bayfield and DH 410 are the 2012 finalists.

These varieties, along with their breeders, will be honoured at the eastern Canada Seed of the Year recognition event at the Royal Agricultural Winter Fair in Toronto in November. The winner will be announced at that time. The event will be open to industry professionals, plant breeders, media and farming community members.

Through the Seed of the Year application process, breeders are encouraged to highlight their research accomplishments in developing a new field crop, forage, fruit, vegetable or herb variety. Any publicly developed Canadian variety is eligible to compete. Entries were evaluated based on innovation, presence throughout the value chain, sustainability, marketability and overall impact on the Canadian agri-food industry.

The Seed of the Year competition has been designed by the University of Guelph and SeCan with additional support from the Ontario Ministry of Agriculture, Food and Rural Affairs, and Agriculture and Agri-Food Canada. •

Bayer CropScience acquires US-based biological company AgraQuest
Bayer CropScience has announced that it has signed an agreement to purchase AgraQuest, Inc. for US$ 425 million plus milestone payments. The acquisition is subject to approval by the relevant authorities.

AgraQuest, headquartered in Davis, California, is a global supplier of innovative biological pest management solutions based on natural micro-organisms. This acquisition will enable Bayer CropScience to build a leading technology platform for green products and to strengthen its strategically important fruits and vegetables business, while also opening new opportunities in other crops and markets.

AgraQuest has its own sales force in the NAFTA crop protection market, and sells its green products through a network of distributors and partners in other
global regions.

Bayer CropScience will also leverage AgraQuest’s technology platform and its promising pipeline of new biological control agents. Several new pipeline products, which include acaracides, fungicides and nematicides, amongst others, are under development, and have undergone successful early field evaluations. Through the acquisition Bayer CropScience will integrate AgraQuest’s state-of-the-art biopesticides production facility in Tlaxcala, Mexico, as well as the company’s R&D site in Davis. •

Agronomy, In the news
September 2012