HIGHLIGHTING THE LATEST TECHNOLOGY IN GRAIN PRODUCTION AND UTILIZATION

Start your engines: a 200,000-acre promise
by Lisa McLean, AgInnovation Ontario
A California tech company is driving towards a piece of the lucrative motor oil market with a clean-running product that outperforms its premium synthetic petroleum counterparts. 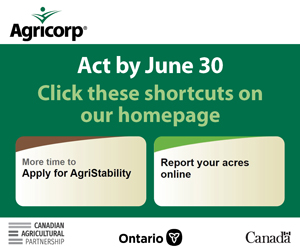 Greg Blake, Senior Vice President of Biosynthetic Technologies, says his company has studied non-food oil products for many years and its researchers have successfully managed to overcome the challenges associated with using vegetable oil in motor oil and other demanding lubricant applications.

“Vegetable oils are a preferred product because they are renewable, non-toxic, and biodegradable, and they have excellent lubricity,” says Blake. “However, vegetable oils also present some hurdles. They have been unstable and they haven’t performed as well at cold temperatures — until now.”

Biosynthetic Technologies has developed technology that transforms vegetable oil into a synthetic oil product — one that does not use petroleum. The company has some heavy hitters behind it, including BP and Monsanto.

The company appeared on Soy 20/20’s radar in 2012 says Rob Roe, the organization’s bioproduct commercialization director. Soy 20/20 is an industry organization with a goal to stimulate and seize new global bioscience opportunities for Canadian soybeans.

“We follow a number of companies that are doing innovative and promising work with soybeans,” said Roe. “Motor oil is virtually untapped in the biobased marketplace. The technology — to take a vegetable oil and transform it into a synthetic product — represents a turning point for vegetable oils as lubricants. Soy 20/20 wants to help encourage this market for Canadian soybeans.”

Revving up for production, Biosynthetic Technologies has built a demonstration pilot scale plant in Louisiana and the company is eying multiple production sites around the world, including one Canadian location in Ontario. Blake notes that once building begins it will extend through two growing seasons before it would be ready to accept soybean oil feedstock.

Who are you following?
Farmers are using Twitter to stay connected and up to date with industry news. Each month, Ontario Grain Farmer magazine will highlight Twitter accounts we think you should consider following or hashtags (#) that will help you join specific conversations.

@SoulesChris
Iowa grain farmer Chris Soules made a big splash north of the border when he did a number of media appearances on behalf of Grain Farmers of Ontario’s Good in Every Grain campaign in late October. Soules just might be the most famous farmer in the world, and he leverages his TV notoriety to speak out on issues important to farmers.

@RealLoudLyndsey
We couldn’t forget to include Lyndsey Smith, the current interim editor of Ontario Grain Farmer magazine. There’s a chance you’re already one of her 8,200+ followers, as Smith has been a voice in Ontario agriculture for years. Smith’s feed is equal parts news and snark, and definitely worth a follow. •

The Digital Toolbox
The smartphone, tablet and computer are important tools on today’s farms. Each month, Ontario Grain Farmer magazine will highlight an app, online tool, or website that may help you in the field or in the farm office.

Delegate directory on gfo.ca
Last month, Grain Farmers of Ontario held its annual district meetings to elect new delegates. You can find the full list of Grain Farmers of Ontario delegates at www.gfo.ca/ About-Us/Delegates. The delegate directory is an important feature on our site; sorted by district, it includes phone numbers for every elected delegate. If you access this page from your smartphone, you won’t even need to type in the number — just find the delegate you’re looking for and select their number to dial automatically.

GFO.ca has other resources for farmer-members who want to learn more about how the organization works, from our interactive district map (www.gfo.ca/About-Us/Districts) to Director information (www.gfo.ca/ About-Us/Directors) and the Annual Report (www.gfo.ca/ Annual-Report). •