This lesson we will continue to explore basic candles.

The doji is one of the most significant candlestick formations and is created when the open and close for a day are equal. It doesn’t matter where this occurs on a wick for a candlestick to be classified as a doji, but the location dictates what kind of doji it is.

When the open and close are both equal to the low of the day, the result is the most bearish of doji — the gravestone doji.

The gravestone doji occurs far less frequently than a common doji but gives a much clearer signal. At the top of an extended move, usually into new high territory, the bulls tried to move the market higher and by the end of the time period they failed to hold the gains. The stock, or in our case the commodity, cannot sustain the probe to new high ground. It opens and closes at the exact same level creating the appearance of a gravestone. This is a significant candle in that it shows that the appetite for the newer higher prices could not be sustained and there is a very good chance that the candle is an indicator of a price reversal in the very near term. 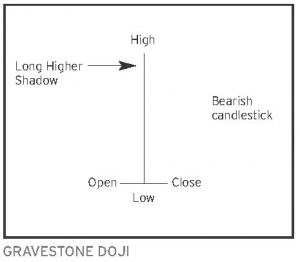 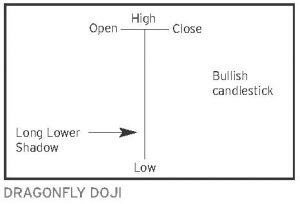 Although gravestone dojis are most reliable at the top of a recent move, it is not uncommon for them to appear at the bottom of a pattern.

This doji is unique in that three of the four candlestick components, the open, high, and close, are equal. A dragonfly doji comes from a day when a stock opens, trades down during the first part the day, and then at some point starts to trade back up, eventually closing near the high (open). This is almost the reverse of the gravestone doji. The dragonfly doji suggests strength as the bulls won the war and closed the candle higher after it traded lower. These candles generally appear near the bottom of a move and suggest a possible reversal to the upside. We will explain in a future lesson how these candles determine the possible indecision or trade opportunity. •

Marty Hibbs is a 25 year veteran futures trader, analyst, and portfolio manager. Hibbs was a regular guest analyst on BNN for four years. He is currently a grain merchandiser with Grain Farmers of Ontario.

DISCLAIMER: This information has been compiled from sources believed to be reliable, but no representation or warranty, express or implied, is made by the author, by Grain Farmers of Ontario, or by any other person as to its accuracy, completeness or correctness and Grain Farmers of Ontario accepts no liability whatsoever for any loss arising from any use of same.