MARK BROCK’S TRIP to Australia and New Zealand may have been cut short by the COVID-19 pandemic, but he learned a lot about the farm practices, attitudes, and approaches to agri-business common to farmers there. Brock received a $15,000 Nuffield Canada Scholarship in 2019 which was sponsored by Grain Farmers of Ontario. 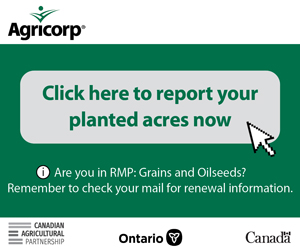 “I’m pretty far along in my journey, and with Skype and Zoom and other technology, I’m pretty confident I’ll be able to do interviews and finish my report by the deadline at the end of November,” he says.

Brock has a 1,700 acre grain farm in West Perth County with his wife Sandi, who also has a 450-head sheep operation that produces 700 to 850 lambs per year. He is also a former chair of Grain Farmers of Ontario.

Brock decided to apply for the Nuffield scholarship because he had always wanted to advance his education — he has a degree in agronomy and crop science from the University of Guelph — and to give back to the industry. His idea was to explore how farmer-to-farmer collaborations work in other places and whether these kinds of structures could work here in Canada.

Brock spent the month of February in Australia and was going to spend March in New Zealand, but was forced to fly home after a couple of weeks, ahead of the border closures and travel restrictions implemented to help control the pandemic.

“In Australia, the farmers don’t see each other as competition, they see the world as competition,” he says, noting that the farmers there are very export-oriented. “They share a lot of information because they think that if everyone does better, they’ll do better.”

Brock attributes some of this attitude to the extreme isolation of Australian farms, the unforgiving climate, and, on the south and west coast, extremely weathered, acidic soil.

Australian farmers are also very attuned to the environment, and can be quick about taking advantage of a good rainfall. Brock recorded several videos for his YouTube channel showing how his farmer-hosts operate. A running joke was that rain was following him wherever he went, so he got comments from locals telling him they would pay to bring him to their farms.

“They’re really resilient, and it made me appreciate the soil that we have at home,” he says, noting that geologically, Ontario is much younger than Australia.

Initially, Brock was specifically looking into business structures such as joint ventures where assets are pooled.

“As I talked to people about my topic, I bumped into a lot of resistance, especially from Canadian farmers,” he says, noting that while people were interested in the idea, they quickly came to the conclusion that it wouldn’t work because of issues around details such as ‘who gets the use of the combine first.’

So, he did a slight pivot to think more about peer groups, such as those dedicated to human resource issues, or soil health. Eventually, he also delved into behavioural economics and decision biases.

“There are some groups in Australia that share financials — looking at the books and suggesting where things might be improved,” he says.

Brock says one of the big lessons he learned through his studies and travel is that the human element is more important than anything else.

“You get into trust, respect, and open-mindedness — there needs to be sharing from everyone,” he says. “You can’t go into a collaboration thinking: What am I going to get out of this over the other person?”

Brock discovered that a strong theme for any collaboration — financial, peer group, research, or joint venture – is a common problem.

“It has to be a fairly specific common problem — you have to drill down into the issue, or the six or seven people around the table could have different views, and then the group struggles to get going,” he says.

One collaboration in Tasmania was actually struggling because the trust among the participants was eroding. It was a formalized joint venture among 12 farmers who got together to develop an irrigation scheme. They were able to start up the venture and run it for one-third the cost of other organizations that provided the same service. Unfortunately, one of the members started bypassing the meter they had set up to monitor usage and was using more water than he was allocated.

“They couldn’t prove it, but they knew who it was because his land looked far better than it should have, given his allocation,” Brock says. “That’s why they were losing trust.”

He said they were still trying to figure out a way to bring the person in line and maintain the venture when he left.

Diversity of skills among group participants — whether it is in financials, agronomy, or human resources — was another theme that surfaced during Brock’s study trip.

“You don’t want a collaboration with 10 people who are good at blue-skying and no one who can implement the ideas,” he says, attributing that thinking to Larry Martin, a long-time agricultural economist he respects and interviewed for his podcast.

His next steps are to develop a kind of decision tree as a practical guide to how to build a strong peer group, joint venture, or other kind of collaboration.

Then, he’ll take the case studies that he has and will be collecting, run them through the decision tree, and show why they have been successful, or, in the case of the Tasmanian group, why it is faltering.

“At the end of this process, my goal is to give Canadian farmers who want to collaborate with a group of farmers — or even if commodity groups want to work with each other on an issue – a tool that will help them figure out if they’re on the same page, and if so, go through a logical decision-making process.”

The Nuffield Canada scholarship program provides people who are in mid-career in agriculture with the opportunity to travel and study, advance themselves and the industry in their home countries, and become part of an extensive global network of farming and food professionals. Learn more at www.Nuffield.ca. •