IT MAY BE some time before the Canadian dollar (CAD) and the U.S. dollar (USD) return to a persistent parity. Although a high exchange rate is usually said to hurt buyers, some analysts say farmers making a lot of purchases in the coming months won’t necessarily suffer.

PHOTO: THE CANADIAN DOLLAR WILL IMPACT MACHINERY EQUIPMENT AND FERTILIZER COSTS, BUT ANALYSTS SAY THE INCREASE SHOULD BE MANAGEABLE.

The final quarter of 2014 took the CAD to USD exchange rate back to places it has not been in years. By early November, the CAD reached a five-year low of 87 cents and market analysts started to print reports suggesting this may be the new normal. TD Economics’ Canadian Agriculture Sector Report, released annually right around the start date of the Royal Agricultural Winter Fair, forecasted the CAD will continue to hover in the 87 – 90 cent (USD) range for the next couple of years.

Dina Ignjatovic, the economist who wrote that report, later said that she believed it might fall even further than what she had predicted in early November; and possibly will not bottom out until the middle of 2015 or persist above 90 cents (USD) until potentially 2016.

Take note of the word ‘little’. According to Ignjatovic, the strong USD will increase prices; however, the currency exchange will be far less noticeable than the impact of fundamental market forces. This is particularly true if the crop inputs or equipment you are looking for come through the southern border. Using fertilizer markets as an example, Ignjatovic says even though Canada suffered from some unfavourable conditions, the rest of the world seemed to achieve above average yields.

“Because we had such a bumper crop this year, it’s unclear whether farmers are going to reduce fertilizer usage or if they’re going to replenish the soil,” she says.

ASSESSING DEMAND
If fertilizer demand is slightly down in the U.S. and Brazil, but China and India increase their use as expected, then she says global demand will stay flat. “We don’t see prices swaying too much in either direction,” she believes — as long as these assumptions prove correct through the coming year.

But Moe Agostino, commodity strategist for Farms.com Risk Management, believes that forecasting the collective behaviour of farmers is the most difficult variable to assess and also probably the greatest factor.

“Despite the low crop prices today, these input costs take time to come down. We’ve still got a lot of demand at nine million acres. We don’t need much fertilizer on beans,” he notes. “The big question is, will farmers apply as much or apply less to manage that cost because of lower prices?”

While some farmers sit and wait for spring, hoping for lower fertilizer prices in order to get their costs under control, Agostino says they may miss out on another opportunity completely.

“Some farms are large and they use a lot of litres of diesel, maybe propane and natural gas; so focus on the price drop of crude,” he urges. “Seasonally, crude has bottomed in November the last many years but the longer trend has been that it has bottomed in March.” Agostino says the opportunity for farmers to lock in some cheaper diesel for 2015 should not be overlooked.

UNPREDICTABILITY
JP Gervais, Farm Credit Canada’s chief ag economist, refers to the low oil prices as the result of “a good old fashioned price war”. The thing about price wars, however, is that they come and go unpredictably and as soon as oil goes up again, the CAD is likely to gain in value.

CHART: THE FALL OF THE CANADIAN DOLLAR AUGUST 2013 TO DECEMBER 2014 AS TRACKED BY BARCHARTS.COM 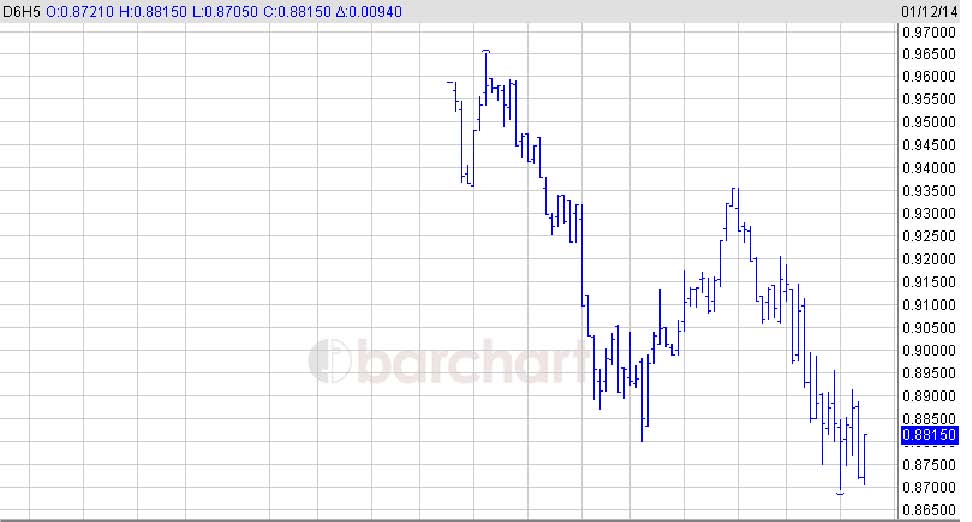 “We have lots of corn — we need strong export markets,” Gervais says. “Through the fall, we saw export numbers tracking and even exceeding what we saw last year, so I’m not so sure a high U.S. dollar is a bad thing.”

Gervais urges farmers not to lose sight of why the U.S. dollar is up. “The U.S. dollar is a bit like a barometer for the entire world economy, so if it’s up, this is a good thing,” he says.

The Canadian dollar is a smoothing factor — something that helps to smooth out fluctuations during times of volatility. That works to farmers’ overall advantage when they are selling grain crops in the form of a more favourable basis.

“Sometimes that shift in the basis is actually more important than the shift in the entire market place,” Gervais points out, especially in Ontario where local market conditions can reward a farmer who is well connected with his buyers better than the one who knows where every drop of rain fell in Brazil last month. Think global, act local is a good motto to live by when you are marketing.

The coming year is likely to challenge even the most savvy grain marketers so Gervais says no one can afford not to have a risk management plan in place.

If margins start tightening up, whatever the situation, he says the first line of defence is always working capital. Whether its diesel, fertilizer, or something else entirely, he believes this will be as good a year as any to investigate the top three expenses on the farm and exhaust every avenue available in cutting them down. •